My server runs on a RAID10 of 4x WD RAID 2 TB disks. Basically those disks are fast enough to cope with the disk load of the virtual machines (VMs). But since many users moved away from Facebook and Google, my Friendica installation on Nerdica.Net has a growing user count putting a large disk I/O load with many small reads & writes on the disks, resulting a slowing down the general disk I/O for all the VMs and the server itself. On mdraid-sync-Sunday this month the server needed two full days to sync its RAID10.

So the idea was to remove the high disk I/O load from the rotational disks the something different. For that reason I bought a Samsung Pro 970 512 GB NVMe disk and a matching PCIe 3.0 card to be put into my server in the colocation. On Thursday the Samsung has been installed by the rrbone staff in the colocation. I moved the PostgreSQL and MySQL databases from the RAID10 to the NVMe disk and restarted services again.

Here are some results from Munin monitoring: 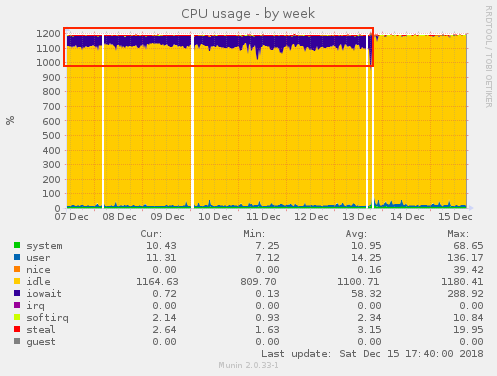 The most significant graph is maybe the CPU graph where you can see a large portion of iowait of the CPUs. This is no longer true as there is apparently no significant iowait anymore thanks to the low latency and high IOPS nature of SSD/NVMe disks.

Overall I cannot confirm that adding the NVMe disk results in a significant faster page load of Friendica or Mastodon, maybe because other measurements like Redis/Memcached or pgbouncer already helped a lot before the NVMe disk, but it helps a lot with general disk I/O load and improving disk speeds inside of the VMs, like for my regular backups and such.

Ah, one thing to report is: in a quick test pgbench reported >2200 tps on NVMe now. That at least is a real speed improvement, maybe by order of 10 or so.

Find me on Mastodon
wilhemina.wendelgart@bluespice.org
© 2022 All rights reserved
Go to top