I don’t know how the water supply is organised in your country, whether it is a public water supply or private, but when you are living in the European Union it may change soon to private water supply. The EU Commission wants to liberalise the water supply and sanitation in the EU, but this would mean higher prices and less quality for the citizens.

There is a citizens’ initiative against this plan, because water and sanitation is a human right and not a commoditiy that can be (ab)used by private companies to make money. Please sign the petition on right2water.eu: 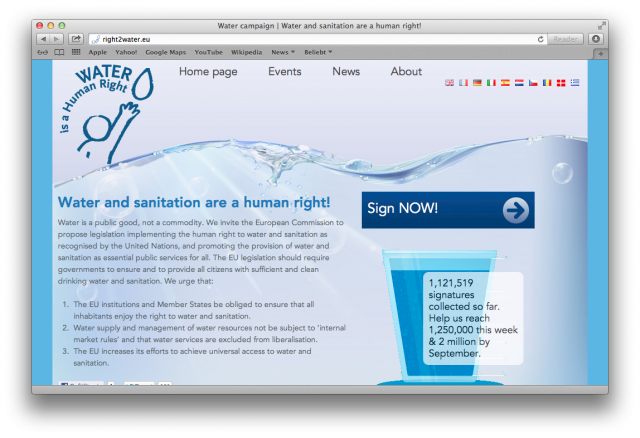 Currently the petition already reached its goal of 1 Million signers, but unfortunately the rules are somewhat more complex: A certain quorum must be reached in every member country of the EU. At the moment the most signers came from Germany, so the quorum for Germany was reached. But according to a statistic posted on Twitter the quorum needs to be reached at least in 7 countries. Only Germany, Belgium and Austria did so. So please sign the petition on right2water.eu and spread the word in your country!

But why is privatization a bad idea? Especially when it is done in a Public Private Partnership (PPP)? As said, water and sanitation is a human right and must not be object for profit. What happens when water supply is done by a private corporation can be seen in the documentary “Water Makes Money” which was aired on French-German TV station “Arte” last week. You can watch it online in German and French.

The petition is running until September. There’s enough time to sign it and – even more important – to contact your Members of European Parliament and request a “No!” to privatization of water and sanitation!