A few days ago I blogged about my problems syncing my N97 with iCal, Sunbird and other calendar apps. Today I tried DAViCal instead of Apples calendarserver (caldavd). To my surprise it worked fairly well, although not flawlessly. To make it short: I can now sync between my N97 smartphone via Bluetooth and iCal on OS X and Sunbird (tested on OS X as well): creating appointments on the N97, syncing via iSync and having the appointment exported to DAViCal via iCal works pretty well. Deleting dates works well in iCal as well. It has some problems as mentioned before on N97, though. But when you delete the date in iCal, it will vanish on the N97 as well. 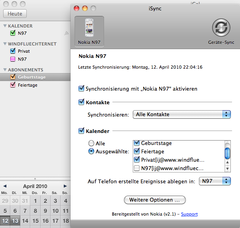 It was somewhat tricky to get it that far. The problem is, that iSync can only sync to a local calendar in iCal. But with DAViCal you can publish/export that local calendar to the server where it is display a another calendar principal. That why syncing with the N97 works pretty well, although you might end up with double entry in iCal. I unchecked the N97 prinicipal/calendar from the server in iCal, as you can see in the screenshot above.

I haven’t been able to test calendar sycing on Debian yet, but I believe that there will be some app that will work. And there are still problems. For example I have an appointment in July and August that are displayed in iCal and Sunbird, but not on the N97. Maybe there are some attributes to those dates that prevent them from being imported into the N97. Dunno.
But so far this is the best syncing solution so far. I’ll test how well this works out for me…